Jake Bugg, The Enemy, Saint Raymond and Reverend and The Makers are just some of the big name music stars who will compete for the inaugural Football Rocks Trophy... 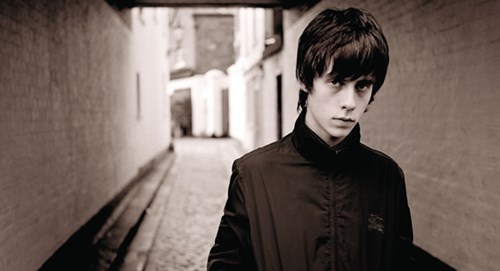 Jake Bugg and fellow Nottingham lads The Swiines have called their mates together for the day in aid of Jake’s Robin Hoodie Foundation and the British Heart Foundation. Eight teams comprising members of over 16 bands will compete at Meadow Lane during the day for the right to play off in the final and eternal bragging rights.

“I love football and the lads and I have a game wherever we can when on tour. Growing up watching Notts County play at Meadow Lane with my Granddad I can’t wait to play there with my mates in front of a good crowd and raise some money for such great causes “ Jake Bugg said. 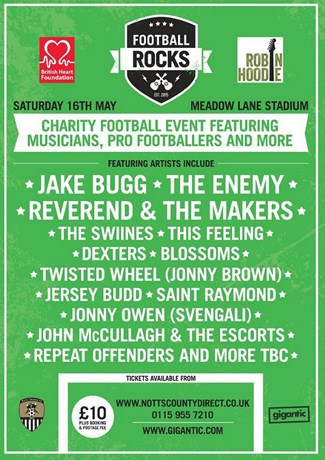 Jake went on “The team are organising a really great day and the atmosphere will be brilliant for all ages with plenty of surprise visits during the day, everyone’s being so generous with their time”

Rory Black of The Swiines added “We've arranged teams from all over the country and some real rivalry is already developing, teams are training and some really serious planning is going into the teams and tactics! I know the clash between The Enemy, who are massive Coventry supporters, and Jakes and our band, being Notts County lads, will be a feature”

Notts County's Damian Irvine said “The bands are so willing with their time. Working with the British Heart Foundation to encourage young adults to get training in CPR and other life saving first aid is a focus of the foundation currently. If we can encourage new life savers to be trained up and in doing so have more trained patrons at festivals and concerts that these acts are playing at around the world then we've done a good thing”

Irvine went on “Jake's newly established Robin Hoodie Foundation provides musical instruments and support for students and children who otherwise may not be able to afford them which is a fantastic and much needed initiative. We here at Notts County pride ourselves on being a community-focused club and for involving ourselves in activities and events that help improve our community and the lives of our extended family, so this event with Jake and his mates really reflects our core values and character as a football club “

The day begins at 11am with gates opening at 10.30am and will culminate in the final match at 5pm. Tickets are only £10 + booking fee for adults with children (under 7's purchased with an adult ticket get in for only £1).