We may have just been announced as City of Football. But our heritage in the beautiful game stretches back a lot longer than that. Jared Wilson explains... 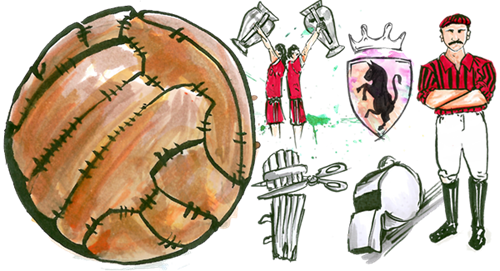 1. Our teams are the oldest
Notts County FC, founded in 1862, are the world’s oldest professional football club. They actually pre-dated The Football Association and initially played a game of their own devising, rather than association football. Nottingham Forest FC (founded in 1865) were hot on their heels as the third oldest pro club.

2. We invented AC Milan
Nottingham lacemaker Herbert Kilpin migrated to Turin to work with an Italian-Swiss textile merchant in 1891. They both loved football and Kilpin went on to found, coach and captain AC Milan back in 1899. Maldini, Van Basten, Baresi and Gullit – you all owe us one, ducks.

3. Juventus FC would play in pink without us
For six years prior to 1903, Juventus FC played in a manky pink kit. Then they put out a call for new shirts which was answered by a Notts fella called John Savage, who sent them a set of the previous season’s Notts County shirts. The colour scheme for one of Europe’s most legendary clubs was born.

4. We understand offside better than anyone else
The offside rule was invented to stop goal-hanging in the 1860s, but in the 1920s Notts County invented the offside trap; a defensive tactic designed to force the attacking team into an offside position. This was later adopted by other managers including Argentina’s Osvaldo Zubeldía (1965) and Arsenal’s George Graham (1986-95) and went on to bore the arse off football fans worldwide.

5. We were first to trial goal nets
Back in the 1880s, football goals consisted of three poles, much as they do now. As the game became professional and competitive, strikers increasingly claimed goals had gone wide and keepers pretended good goals had gone outside the post. So some bright spark came up with the idea of a ‘pocket’ to catch the ball, and these were first trialled at Nottingham Forest’s Town Ground. Hyson Green-born Fred Geary, playing for league titans Everton, became the first player in a competitive game to ‘put one in the onion bag’.

6.We invented shin pads
Samuel Widdowson played for Nottingham Forest in the 1870s and invented football shin pads in 1874 by cutting down a pair of cricket pads to protect his legs and strapping them outside his stockings. Initially the concept was ridiculed, but it soon caught on with other players and shin pads are now required by the laws of the game.

7. We helped create the penalty kick
In February 1891, a Notts County player committed a blatant handball in the area to save a goal in the FA Cup Quarter Final against Stoke City. After this, and similar incidents in Scotland and Ireland, the idea of sorting it out with a penalty kick was born.

8. We won the European Cup – twice!
Thirty-summat years ago, Nottingham Forest FC were the kings of Europe. The legendary Brian Clough took a team from the second tier of English football and got them promoted. The next season, they won the English first division title and got into Europe. The season after that, they won the European Cup, beating Malmo 1-0 in the final. The season after that? They did it again, this time beating Hamburger SV by the same scoreline.

9. We had referee whistles first
Apparently, before the introduction of the whistle in football, referees indicated their decisions by waving a white handkerchief on the pitch. After realising that players were more likely to follow the ball than the ref, Forest bought a whistle in the 1870 and, after a successful trial period, it soon caught on.

10. First million-pound footballer
In 1979, Trevor Francis signed for Nottingham Forest from Birmingham City for £1m. In an era where footballers only earned a few times more than your average man in the street, this was a seminal moment. Nowadays the top players in this country earn that in a month. Que sera sera...

This article was originally published in LeftLion Magazine Issue 64.