Denise Richards is a 56-year-old football player and coach, who currently works as a sports development manager. We caught up with her to find out more about her football journey… 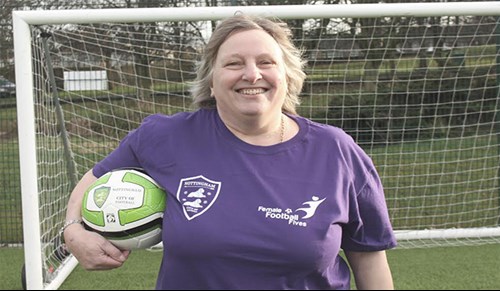 When did you first get involved with football?
I used to play with some of the boys who lived near me and when I was on my own, I would kick the ball against the garage wall in the back garden. I asked my dad to take me to watch Forest when I was five, and I’ve been going ever since. One day, my grandpa said that Forest Ladies and Forest Rangers were looking for players. My dad didn’t agree with girls playing football but my mum took me along. I was 12 and we played 11 a side ladies on a full size pitch. In my first match I got struck by the ball in the face and my nose bled, but I carried on. I went to Sweden with them and I played regularly that first season – we won everything. I was right footed but played left back which meant that over time I became fairly two-footed.

I stopped playing in my late teens and then again when I was 29 as I had a knee injury. I was told by the doctors I couldn’t play again. At 39, I began playing for Gedling ladies and I loved it. At 53, I started playing 5-a-side at Kimberley.

What led you to take up coaching?
In 1997 my husband showed me an advert in the local paper for a female coach. It was around the time I was told to stop playing. I went to the club and did my first coaching qualification. Then I was asked to coach and manage a girl’s under 12’s team. I jumped at the chance and a few months later completed the Level 2 qualification. Following my Level 3 qualification, I spent a couple of years coaching at Notts County Girls Centre of Excellence.

In 2001, I was fortunate enough to become a women and girl’s football development officer in Nottinghamshire. I’d been in a totally different profession at the time and I think that volunteering in the sport helped towards getting the roles.

Later in my career, I became an FA Level 1 Equality tutor, but following a serious accident in 2007, all of my coaching and tutoring stopped. I continued to work in sports development, though.

What do you enjoy most about playing football?
When I play, I just get a buzzing feeling. It sounds cheesy, but I feel so positive. I play in defence partly because I’ve always played there, but mainly because I’m slow, and even with the informality of the 5-a-side league, I still want to play as well as I can. I want to go home and feel that I’ve played well even at this level; did I get many blocks in or did I give the ball away. I don’t put any pressure on others, but I do on myself.

Because of my health issues, I do ache an awful lot when I’ve played, and I have to strap myself up. But I love it, and to be honest, I think that any issues I have would be far worse if I didn’t play. I know it benefits me.  My doctor knows I play and doesn’t tell me I shouldn’t.

What is the most challenging thing about being a female player and coach?
I think it’s getting easier to be a female in football, though there is still a long way to go. One of the reasons I stopped playing years ago was because it was not the done thing for girls. That sounds unbelievable now, but things were different. I started playing again when my husband encouraged me.

It would be good to see more women coaching men at grassroots and above. I went to London and was asked to coach a local men’s team for a session. They had to make a special announcement to the players to tell them to behave and listen to me – I wonder if that would have been the case with a male coach.

Being an older female coach and player is a double whammy, there are people who don’t seem to think I have anything valid to say about coaching football. I wonder sometimes if it is my age as well as being female. It’s interesting when we go on holiday and people talk to my husband about football and he starts asking me things – you can tell they’re surprised at my interest and knowledge.

What advice would you give to any woman wanting to get into football?
I would say go for it! I went for it when it was much more difficult than it is now – there were no girls’ football teams in school or the opportunity to play for a club. Now, females of all ages can play at the appropriate level/age group and there are both formal and informal opportunities. To anyone who does not get the opportunity to play in school – look for a local club.

Even if you’ve not played football before, think about it and have a go no matter what your age. You are never too old! There are junior teams, veterans and walking football.

In terms of coaching, there are quite a few schemes to support females getting into coaching football. I am a mentor on the FA’s scheme and I really want to support female coaches in particular, as I think sometimes women have confidence issues. If you want to be a coach, get your qualifications, learn as much as you can and have faith in yourself.

If you want to get involved with football, check out our activities page to find out what’s on near you.