Forest Ladies out of Toon

Forest’s depleted squad travelled to Newcastle on Sunday and suffered a humbling defeat to accompany an under par performance that cost the reds dear. 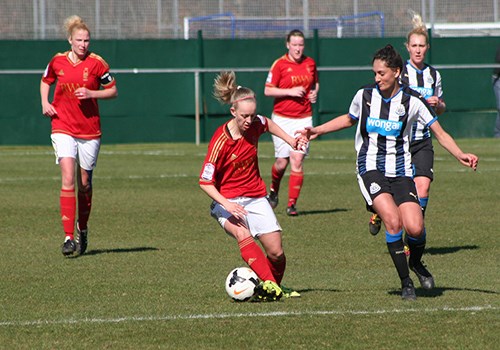 Forest have been relatively on form in the league since the only other losses earlier in the season to Bradford and Derby. However, Steve Stennett’s side were affected with 6 regular first teamers missing through injury or absence and this proved to be costly for the long trip to Newcastle. Newcastle had been suffering some defeats leading up to the game but had boosted both their coaching and playing staff during the previous week with quality signings in  Chloe Johnson, Lindsay McCubbin and Rachel Coleman to shore up their battle for safety in the FAWPL.

The game actually started well for the visitors and Newcastle were found mostly packing their defensive third as Forest pressed forward. Rebecca Kemp looked to be working well with Mariah Cameron on the left side but just failed to find Andi Bell who was thwarted through player marking throughout the game.

Forest had to make an early change due to illness on 25 minutes as Sarah Voce was replaced by Moriah McIntosh. Stennett had to move Kemp to right back as McIntosh went to the left side.

With Forest still pressing chances were blocked by Ejupi, McKechnie and Bell as Newcastle blocked or cleverly read the shots early. Half time 0:0

The second half was equally disjointed for Forest who lacked cohesion and understanding and failed to find their own players with simple passes. Kelly Kennaugh battled hard centrally and Ejupi just missed a critical through ball to Bell who was making forward runs in parallel with McIntosh and McKechnie.

Bell was unlucky as she was clearly pushed to ground with huge cries for a penalty but the referee waived on.Newcastle made a key substitution on 55 minutes as ex Sunderland player Chloe Johnson came on with 55 minutes played. Johnson settled quickly and Newcastle were creating chances on the break.

With 15 minutes left on the clock the game looked to be in Newcastle’s favour with a resulting counter attack cross that was neatly finished at the far post by Chloe Johnson to put the home side in the lead. 1-0.

Minutes later Andi Bell was clearly fouled again for a second time in the box but cries for a penalty were again. With the minutes ticking by Newcastle cleverly kept possession by keeping the ball in the corners and a frustrated Forest were left with heads in hand at the final whistle as Newcastle celebrated a deserved 3 points.

Forest Head Coach Steve Stennett said after the game: “You could describe our game as a bad day at the office, and I could use the excuse that we were missing 6 key First Team players but I will not look for excuses. Our performance was certainly below par from a Forest team that has been playing very well of late and have been putting in good performances to get us to where we are in the table, but we came up against a team who literally parked the bus. We as a team were void of ideas of how to break them down and on top of that our quality was not good enough in terms of passing - moving and first touch. But – We win together, we lose together – and we move on together. We have now to get our heads down, work hard in training in preparation for our game vs Bradford.