Neither team could find a winner as the sides shared the points at Meadow Lane... 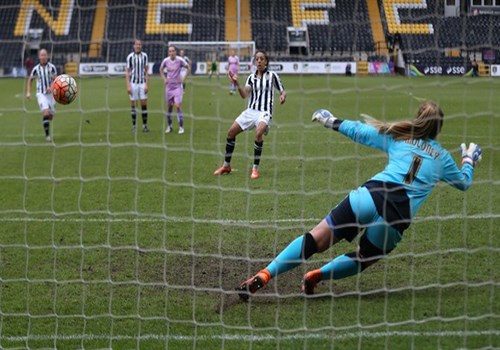 Helen Ward admitted there was a tinge of disappointment after Reading missed out on a first WSL 1 victory following a 2-2 draw with Notts County.

Ward had got Reading on the board after just six minutes, only for Jess Clarke to pull one back from the spot for the Lady Pies.

Reading were able to respond immediately with a goal from Kirsty McGee, but despite leading at the break, they had to settle for a point as Clarke equalised again on the hour.

But after a second draw from three league games this campaign, Ward was understandably a little frustrated.

She said: “Having led the game twice, you always want to come away with a win but Notts County are an experienced side, so a point is a point at the end of the day but the fashion in which we conceded both goals was disappointing and it would have been a good opportunity to get our first win on the board.

“We played them last year in the cup and we thought we played them quite well but I think we felt we could have probably pressed them a bit more and so our game plan was to come out and press them quite high and it worked and put them under pressure.

“We got into them quite early and got an early goal and played well that first-half but disappointed to only come away with a point.

“I think (my goal) was a clearance that fell to me and I looked up and couldn’t see anything on in terms of passing, so I thought why not have a go and thankfully it went into the top corner.”

Ward put Reading ahead after just six minutes when she lashed home, but a handball in the box gave Clarke the chance to equalise.

McGee’s header put her side back in front, but Notts County were worth their equaliser but manager Rick Passmore was disappointed with the display.

“We didn’t play with the crispness and accuracy that we normally have and we looked lethargic and second best for long periods of the first-half and making poor decisions.

“Then second half they’ve had a rocket, they’ve come back and showed a lot better attitude and we’ve got in and amongst the Reading back four and played some good football and Jess Clarke has got in and behind them a few times but we’ve not gambled to get into the box.

“I think second half we could have gone on and won but we need to play a lot better than we have done.”

The Lady Pies are back in action on Monday 2nd May at Home to Liverpool Ladies FC K0: 15:00. For more information visit: http://www.nclfc.co.uk/