The Art of Football

We spoke to Luke and Gabe Cuthbert, the Nottingham-based siblings behind the coolest t-shirt brand in football... 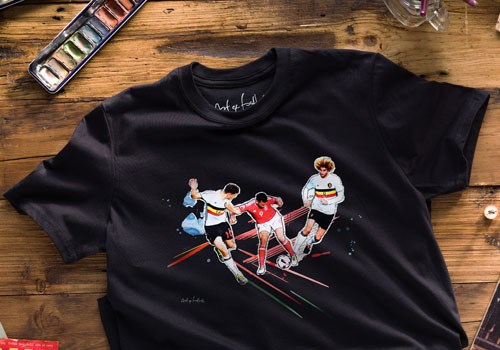 When did you start the business?
We launched our website on the December 4th 2013 so this year will be our 3rd birthday.

What was the inspiration behind the business?
It was after watching Man City’s crazy title-winning match that the idea for these T shirts came to me. The sudden transformation of anguish, nerves and misery into pure, uncontrollable elation was something of a spectacle. Now I’m not a City fan, nor is my club even involved in the Premiership, but even I was bouncing off the walls when Aguero finally broke through QPR’s defences. As an artist and designer, I wanted to be able to immortalise that moment

Why did you decide to make t-shirts instead of canvas or selling the art work as a wall piece?
We wanted to create a T shirt that fans could wear with pride (as they would usually do with a replica shirt). The majority of football T-shirts we see these days are just generic, crudely screen printed images of Luis Suarez’s big ugly grin, or something along those lines, that are churned out in their thousands into a market that already has thousands like it. We have a very different philosophy. Each design has been thoughtfully made primarily as a piece of art, this way we can do our best to do justice to those moments that fans cherish so highly. We look to capture all the raw emotion and energy that you felt during those seconds of celebration and, most importantly, we look to do it in style.

We have actually started selling prints and canvas’s of our designs after having a lot of requests.

Do you guys create the T-Shirts yourselves? If so, what’s the creative process like? How do you decide on a design? What materials do you use?
Everything is done in house from the creation of the designs to the manufacturing and dispatch, that way we keep as much control as possible to ensure quality at each step.

We choose the design either from having lots of requests for that moment or if a particular event is coming up e.g. an England collection when the Euros are coming up.

Do you ever create custom designs for people?
We have in the past if we love the story behind them. We did one for an Irish pub team in Paris. They had a photo of their captain of 10 years on the last day of the season scoring to win the title which obviously resinates with us. Also we then got to drop into the pub while in Paris and the print was above the bar, which was pretty cool!

You describe certain footballers as artists on your website – “There are good players, great players and then there are the Artists.” What do you mean by this? Which of today’s footballers would you describe as an artist?
These are the players that have originality, creativity, spontaneity and vision. They are the type of players that you pay to go and watch and they make the game beautiful.
The Premier League is full of creative players at the moment such as Ozil, Payet and Marhez, that where a joy to watch last season.

You guys are from Nottingham, what do you reckon to Nottingham being named the first City of Football?
It’s an amazing opportunity for the city. There is so much football history here and a huge following, but this allows the opportunity for more people to get involved and in different ways. Nottingham is real creative hub and it would be brilliant to see different areas of this getting involved such as graphic design, fashion even architecture.

You were awarded the Baldwin’s Accountants KickStart Young Entrepreneurs Award in 2014 – how did that feel?
It was in the early days so provided us with an amazing experience to know that people believed in what we where trying to achieve. That really gave us the confidence and platform to push on and take the business to the next level.

What’s the next step for the business?
We want to become a household name that when something incredible happens in sport people look to us for our interpretation of it.