Notts County’s Meadow Lane stadium is set to host Nottingham’s first ever CEO Sleepout, which is hoped will generate thousands of pounds for local disadvantaged people... 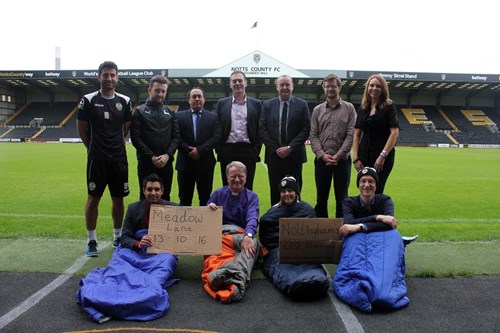 CEO Sleepout is also a registered charity and was set up to improve the lives of people battling with homelessness.  After a number of successful high-profile events throughout the UK at major sporting grounds such as St James’ Park, Lords and Villa Park, CEO Sleepout is now coming to Meadow Lane, home of the world’s oldest football league club.  Having recently raised £63,000 in Manchester and £80,000 in Newcastle, organisers from both Nottingham sports clubs are optimistic that Nottingham CEOs will be keen to show their competitive spirit and join the event to help raise thousands of pounds to support the Nottinghamshire community.

Neil Kelly, Events and Partnerships Executive at FITC said: “We’ve wanted to organise a sleep out at Meadow Lane for some time and decided to partner with CEO Sleepout because they had had such success in organising similar events around the UK.  We are working with the TBCT, The Friary and Emmanuel House’s Winter Shelter to organise a memorable event that will raise important funds at a key time of year for homeless people.  With so many committed local charities working together, we hope many people will benefit from this event.”

Both sports charities (FITC and TBCT) work to improve the lives of thousands of local people each year, using the power of sport and the profile of their respective sports clubs to deliver a range of sporting projects to many different groups of marginalised people.  By joining together, this event will help to sustain the work of both charities.  In addition to this, two local homeless charities will also benefit from the event with The Friary and Emmanuel House being nominated as the homeless beneficiaries for the event.

Over twenty local CEOs, directors and senior management have already registered for the event with very little promotion.  It is hoped many more will show their compassion by registering to take part in the coming weeks when news of the event spreads.  Each CEO has a target of £1,000 to raise in sponsorship.  CEOs from some of Nottingham’s top companies will dust off their sleeping bags and take part alongside Notts County Ladies’ CEO Matt Alexander, Bishop Tony Porter and Nick Murphy, CEO of Nottingham City Homes, who said:

“I’m delighted to be taking part in the CEO Sleepout.  I think it’s a great initiative and FITC and TBCT should be applauded for arranging this.  I’m sure the support and the profile it will give to these worthwhile local charities will be of enormous value to them.”

On the evening of the Sleepout, CEOs will arrive at Meadow Lane for a briefing and have the chance to network before the event with senior figures from other Nottingham businesses.  The sleep out itself will take place in the main Derek Pavis Stand where CEOs will have the option of sleeping under the concourse or directly next to the pitch in sleeping bags.  The Sleepout will finish at 6am on Friday morning when CEOs will enjoy a well-earned breakfast before facing a work day on Friday.