Ellen White scored twice as Notts County cruised past Yeovil Town and into the quarter finals of the Continental Tyres Cup... 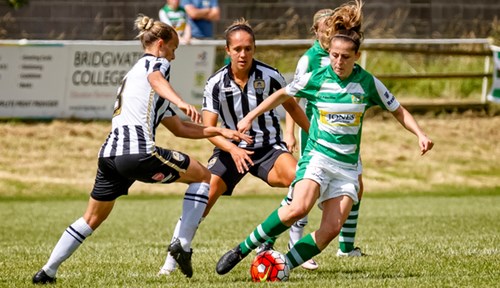 Ellen White paid tribute to Notts County’s latest signings as she scored twice in their 3-1 win away at Yeovil Town to secure the Lady Pies a spot in the quarter-finals of the FAWSL Continental Tyres Cup.

After a delayed kick-off due to bad traffic, White sealed her double before half-time, before Fern Whelan netted just after the hour mark.

The Glovers were able to pull a consolation goal back through Nadia Lawrence with 15 minutes left, but it was too little too late for the home side, and White insists the best is yet to come from her County teammates.

“We are all really pleased to be in the hat for the next round, that was our main priority,” she said.

“We had a decent warm up and we knew we had to come out the blocks and start quickly, which we did very well.

“Hopefully this win will now give us momentum going into the game against Arsenal away next week, and the confidence that we can go there and get something.

“We are always looking to improve, and to get better, and our recent signings will only help us do that.

“They give us some fantastic midfield options and it adds another element to the team, and hopefully we can now push on and improve in the league and cups.”

The visitors asserted their class early on as White scored her first goal after just two minutes, slotting the ball past Beth Howard from Dani Buet’s floated free kick.

County continued to assert their dominance and doubled their lead after 22 minutes, Chelsea Weston finding White with the perfect cross allowing the England international to calmly nod in her second.

Whelan bagged a third for Notts County midway through the second half, rising above a crowded box to head in a Jo Potter corner.

Minutes later, Ellis Hillman sustained an injury which resulted in her being stretchered off in a neck brace, before Lawrence pulled one back for Yeovil on the 75-minute mark.

But for captain Helen Bleazard, her side must focus on the positives from the defeat.

“I think it was a few individual mistakes that cost us. We didn’t switch on at a few incidents but we managed to get ourselves back into the game,” she said.

“It was the first time we have scored against Notts County and I think it’s a real credit to us and our team ethic.

“There’s a lot of positives we can take from this, and we can hopefully now use them to push on in the league.”