Central team up with County for new Female Football Academy

A new ladies football academy has been launched by Central College Nottingham to help unearth the next generation of young female football stars...

The College has teamed up with Notts County Ladies FC to run the programme which will be open to 16-18 year olds who are enrolled on a full-time course at the college.

Students will have access to regular and structured training by qualified coaches, strength and conditioning sessions, player analysis as well as playing in competitive matches in the Association of Colleges East Midlands Football League. The ultimate aim of the academy would be for a student to progress from the College into the Notts County Ladies WSL squad who compete against super powers such as Chelsea, Manchester City and Liverpool.

Head of Sport at Central College, Adam Beazeley said: “Women’s football came to real prominence during the recent World Cup and the Notts County Ladies players played a huge part in their good run.  The College has been considering setting up a ladies academy for a while and we are delighted that Notts County Ladies have agreed to become our partner on this exciting venture. We’re hoping that there are a group of female football players in the City who would be keen to combine academic  progress with success on the football pitch.”

Matt Alexander, Chief Executive of Notts County Ladies FC said, “This is a great opportunity for talented players in Nottingham to combine their skills with furthering their education. As a football club we’re creating an infrastructure with a clear pathway into elite football. Central College Nottingham is a fantastic institution in the city and we’re looking forward to working closely with them.”

The Academy will launch in September 2016. 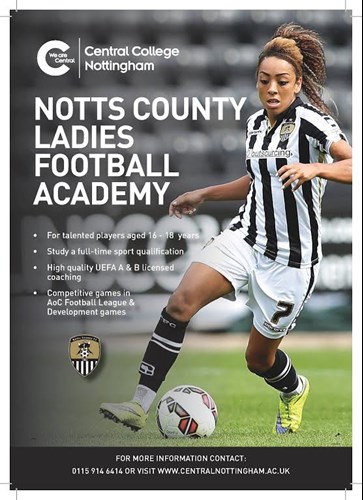