Legends Come Together to Help Raise Money for FITC 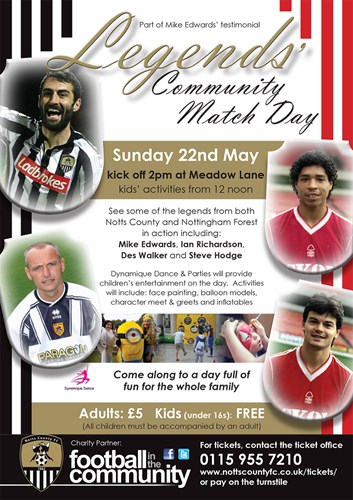 Notts County FC Football in the Community is the Charity Partner for the event, and they will therefore benefit from the generosity of the fans from both clubs as well as from the wide range of activities that will be going on at the event.

FITC have partnered with Dynamique Dance and Parties to provide fun entertainment for children who will be attending which begins at 12pm on the day before the game kicks off at 2pm. The ‘Kids Activities FunZone’ will be situated in the car park behind the Derek Pavis Stand where there will be face painting, balloon models, character meet and greets and inflatables, such as a bouncy castle and inflatable footballs, plus many more. Activities on the day have kindly been sponsored by FITC Community Partner, The Rotary Club of Nottingham.

Dynamique Dance and Parties are a local business who offer a wide range of services which are tailored to the needs of their clients. They were founded in 2007 by Katie Keating who is a professionally trained dancer and choreographer. They provide services for corporate events, weddings, dance teaching as well as children’s parties and events and they have over 10 years of industry experience.  For more information visit: www.dynamiquedance.com/home

Most schools that FITC have work with around Nottingham and the county will be invited to the event along with many other schools from throughout Nottinghamshire.

Some of the biggest names in Notts County and Nottingham Forest history will be on show during the game with Mike Edwards and Ian Richardson, FITC’s Activity Manager, already confirmed for Notts and Former England Internationals Des Walker and Steve Hodge confirmed for Forest. More players will be announced in the build up to the event on both FITC’s and Notts County’s websites. There will be a meet and greet with the players after the game in the Meadow Lane Sports Bar situated at the back of the Haydn Green Stand.

Mike Edwards, who is playing in the game as part of his testimonial year, said about the event: “FITC do so much amazing work within the local community of Nottingham whether it be their work with cancer survivors, around mental health, or their work with children. This event is a great way to raise some much needed funds for the charity as well as bringing together the community of Nottingham regardless of whether they support County or Forest. Hopefully the day will be a great success and that we can raise a lot of money for FITC.”

Steve Hill, Community Director of Notts County FC FITC, added: “Mike has been a great ambassador for both the club and FITC over the past 10 years as he has been down to some of our projects in the past and has met some the people we help and support. It is a great pleasure that as part of his testimonial year that he has agreed to help us on this community day to raise as much money as possible so we can continue the amazing work that we as a charity provide within the local community.”

Entry is only £5 for adults and free for anyone under 16 (all children must be accompanied by an adult). The Derek Pavis Stand will be open for the match and Tickets can be purchased prior to the event by following this link: