Central College Nottingham’s female football team are set to represent the East Midlands in the Association of Colleges (AOC) national competition after winning the regional heats... 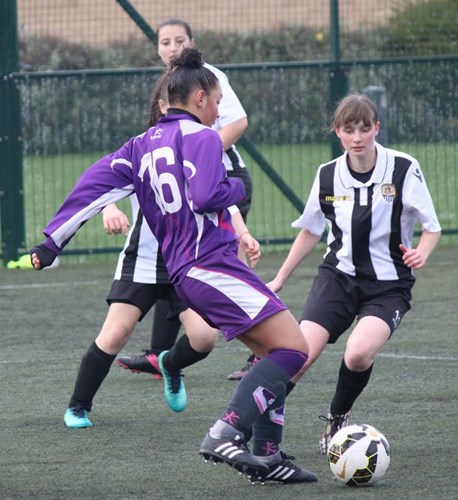 Central College hosted the 7-a-side event at its Clifton Centre last week as seven local colleges battled it out with Central looking to retain its title after winning in 2016. Since then the College has teamed up with Notts County Ladies (NCLFC) who now run its Academy programme led by Notts Coach Tanya Oxtoby.

The first match against a strong Derby College side resulted in a 2-0 win, the match also included a contender for goal of the tournament after Rebecca Frith’s volley from an acute angle found the top corner.

The NCLFC Academy then went on to beat Moulton College by two goals to nil, which was a really positive result given the six all draw that these two teams had played out in the league a fortnight earlier.

A further 2-0 win was achieved against Wyggeston QE College from Leicester. Goals from Jade Kneen and Danielle Sanderson was enough to secure victory. The girls played sensible football and were one nil up at half time. In the second half they managed to slow the game down and hit QE on the break.

NCLFC Academy’s first game after lunch was against the traditionally strong Lincoln College. This match was hard fought and aside from two great saves by Amy Edis , NCLFC might have lost the game, as it was this match finished 0-0.

In the penultimate game of the day the girls put up a spirited and strong performance against Chesterfield College. Another good strike from Rebecca Frith half way through the second half was enough to separate the teams, and take the Notts County Ladies Academy to the brink of winning the tournament.

The final match was a tough encounter with Loughborough College. The game was closely contested with both teams finding chances hard to come by, as it was the match finished 0-0.

At the final whistle it was revealed that Central College had won the competition and for the second year in a row and the college’s female football team had won the right to represent the East Midlands at the National Finals in April 2017.