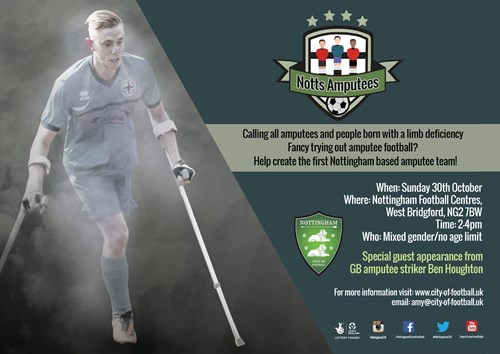 The City of Football is a calling all amputees and people born with a limb deficiency to attend the event which is to be held at the Nottingham Football Centre from 2pm on Sunday 30th October.

Both males and females are welcome at the event where there is also no age limit, with the aim of encouraging as many participants as possible.

Nottingham City of Football are aiming to create the first Nottingham based Amputee team and are hopeful that the presence of Great Britain star Houghton will go a long way towards achieving that.

“I am really excited to be a part of trying to create an Amputee Football team in Nottingham,” said Houghton.

“I really want to help inspire the next generation and feel it's about time we had a team based in the city I grew up in.

“I would like to see as many players down to the taster session on Sunday 30th October, it doesn't matter if you have never kicked a ball before, just come along and have a go.”

Katie Gibson, Programme and Partner Coordinator at Nottingham City of Football said: “This is a fantastic opportunity for all amputees to get involved in football.

“We are delighted to be able to have Ben Houghton at the event, and hopefully his experiences will help to inspire many others.