Notts County and England goalkeeper Carly Telford made a guest appearance as the Nottingham City of Football hosted the Multi Sport Mash Up event last night... 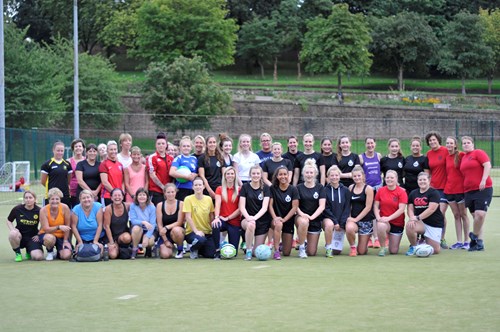 The 29-year-old, who has represented her country seven times since making her debut against Scotland in 2007, was at the Forest Recreation Ground on Tuesday evening offering advice and tips to female football, rugby and netball players.

The winners each won tickets to see England’s women take on Estonia in the Euro 2017 qualifier at Notts County’s Meadow Lane on Thursday 15 September.

Telford was also representing Precision Goalkeeping at the event, with the sports equipment specialists launching the first ever goalkeeping gloves designed specifically for women earlier this year.

"I think the event is a fantastic opportunity and it's great to see so many girls, all of different ages, so active in different sports,” said Telford.

"There are lots of events in Nottingham that women can get involved in and the facilities that we have in the city are incredible.

“Hopefully we can have more females at these kind of events on a regular basis, as it is really fun to be part of and you can really challenge yourself.

“To be able to test yourselves out of your comfort zone can be really beneficial and it can help women gain a lot of confidence when they are taking part.”

Katie Gibson, programme and partner coordinator at the City of Football, which aims to raise the levels of participation in football, said: "This was a great chance for females to showcase their talent across three sports and it has been a great occasion for everybody involved.

"At City of Football, we are looking at raising the levels of participation in sports in Nottingham and this was a perfect opportunity to not only be part of a great event, but also for girls to get involved in different sports."

18-year-old Cala Thornton, who represented the competition winners Rise Park FC, said it is easier than ever before for women to get involved in sports.

Cala, of Beeston, said: "It's massively accessible these days and there are always so many different events like this and more clubs."