The oldest football club are miles ahead of the rest with their brand new sensory experience rooms... 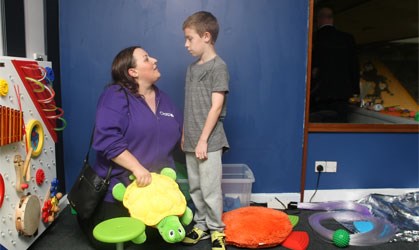 Football matches can be an intense experience. They’re loud, crowded, and you’re surrounded by passionate fans who are either celebrating a win or mourning a loss. Either way, they’re definitely over-excitable.

For someone with learning disabilities, autism or severe anxiety, watching their favourite local team play live can be a struggle.

Now, fans of Notts County can enjoy watching their favourite team play from the comfort of one of three sensory rooms now open.

The club, known as the oldest Football League club in the world, is now the first EFL club to provide specialist facilities for those who may find the stadium environment overwhelming.

There are three rooms specially designed to cater for users with different needs. The first room contains bubble tubes, fibre optic lights, vibrating pillows and a milky way fibre-optic carpet, designed to calm and provide a relaxing environment for folk to watch the football match in. The second room is slightly more chilled, for those who might find the first room too over-stimulating, with a space projector with slow, lava lamp-like projection. There’s also an aroma-diffuser that can be changed to suit specific user’s needs. The third room is for the more active user, and for people with sensory processing disorders. There’s a lot of spinning, rocking and bouncing to be done, as well as well weighted and compression vests. There’s even a parent and carer room.

Notts County have been doing all they can to make the football match experience available to all, and have sought advice on what to include in these rooms from specialists including Autism East Midlands, Rompa, the Shippey Campaign and Indigo.

Dan Casey, marketing manager at Rompa, said of the developments, “We are absolutely delighted that Notts, the oldest Football League club in the world, are on board and we hope this will show other clubs it can be done.