Whoever you are and whatever you do, there's definitely a game for you to get involved with... 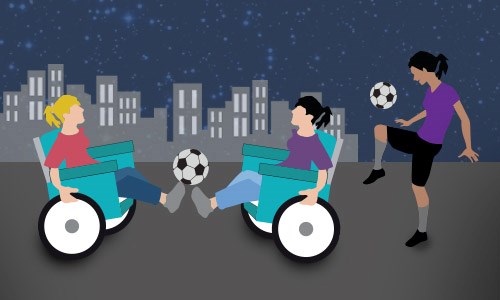 As a City of Football, we’re keen to let you know that whoever you are, anyone with an interest or desire play football can find a game that’s best suited to them. In fact, there are so many different versions of the game available, there’s really no excuse for you to get up, get out and get proper involved.

Amputee Football
Outfield players in a game of amputee football usually play without prosthesis, and instead, use elbow crutches, but for those who are uncomfortable with crutches, clubs usually allow prosthesis to be used. Those who play in goal are single arm amputees.

CP Football
For sufferers of Cerebral Palsy, the game can be played both seated and standing. Seated, players will often play in wheelchair or powerchair football teams and leagues (see below). The standing game is usually played with seven-a-side teams, on a smaller pitch with slightly smaller goals. With two thirty-minute halves and no off-side rule, the only other difference from non-disabled football is that players can roll or throw the ball back into play.

Deaf or Hearing Impaired Football
There aren’t many differences between the non-disabled game, and often, deaf football teams will compete in mainstream British Deaf Football Cup leagues around the country. There is an international criteria that players must adhere to, in that deaf players must have an average hearing loss of 55 decibels or more in their best ear. Apart from that, the rules are pretty much the same.

LD Football
This is a game for people with a learning disability. Usually, 5-a-side teams play on a slightly smaller pitch. The off-side rule is forgotten, and kick-ins can be taken as throw-ins, depending on player preference. Players with a learning disability can play in ‘Unified Teams’, or mixed-ability teams. In this circumstance, learning disabled players are referred to as players, and the non-disabled referred to as partners. There must always be a smaller number of non-disabled players in each team, and the referee is to ensure that the partners do not dominate the match.

Visually Impaired and Blind Football
In a game of blind football, the 5-a-side teams must each wear eye patches and blindfolds while playing, and the only player to be sighted is the goalkeeper, but they can’t leave the area. There are no off-side rules, and the game is played on a solid surface – for example, in a sports hall rather than outside on a grass pitch. The ball itself contains ball bearings so that players can identify it’s position through sound.

Wheelchair/Powerchair Football
Played indoors on a 5-a-side pitch with six metre-wide goals, the game of wheelchair football has been played in the UK for a fair few years now. Each team consists of four players, with around four subs per team. Players use specially adapted power chairs during the forty minute matches. The game enforces a strict one-on-one tackling policy, and push-ins are used instead of a throw-in.