Nottingham City of Football have launched a brand new app that allows users to create their own profile and search for football matches in their local area that they can participate in... 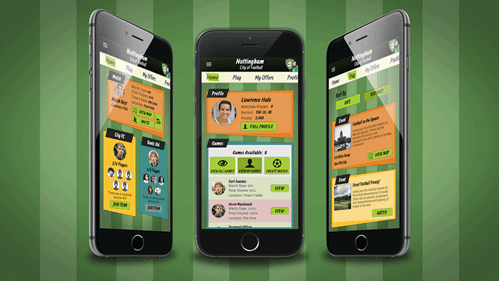 As well as joining in matches with others, users can invite their friends and earn points on the free to download app. Points can be used to redeem discounts at local stores and online retailers across Nottingham.

“The key thing we wanted to do with the app was to ensure it was simple for those who want to get involved in football to find a match happening near them and allow them to set a match up and invite people to play.

“We’ve managed to do that and we’ve also created a reward system which means that those who do download the app and use it to set up matches will earn discounts and vouchers for local retailers.”

The new app also allows users to keep up to date with local Nottingham City of Football events that are happening in their area with the ‘Play’ section that lets users know how close the event is to their location via a map and when its going to take place.

The ‘Skills’ section of the app contains some impressive football skills hosted by multiple world record holder Dan Magness with competitions asking users to recreate the skills and get their friends to vote for a chance to win exclusive prizes.

Geoff Baker, Founder and CEO of ICN based in Nottingham, who developed the app said: “The Nottingham City of Football app has been such a rewarding project to work on for my team.

“Apart from anything else it’s a fantastic idea. I know so many people who really want to get involved in football again or try it for the first time, but they just struggle to find people to play in matches with.

“We’ve made the app really user-friendly and fun to use, which means hopefully the whole experience for the user is enjoyable as well as very useful.

“We want to get as much feedback as possible on the app and continue to help those who want to participate in football by providing them with the perfect tool to do it.”

The app can be downloaded now on the iTunes Store for Apple and on Google Play for Android by clicking on the links below.