Forest had to dig deep to secure 3 points against a resolute and determined Loughborough Foxes side who are fighting for survival in the FA Women’s Premier League. 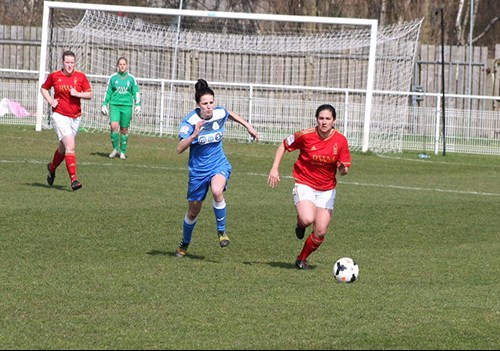 Forest were in a similar position last season so were expecting a full on battle for the points. It was no surprise therefore, that both sides were fighting for possession from the first whistle. Forest’s Cunningham and McKechnie worked well with overlapping runs on the right side and Cunningham created the first chance for the home side by whipping in a cross that flashed passed the goal. Andi Bell was clearly a marking target for Loughborough as she was closed down constantly and collectively by the Foxes central defence and balls pumped to the Forest forward was quickly dealt with by Loughborough.

Kinnerley was kept busy on a couple of occasions as Loughborough broke the defence to deliver shot that propelled the keeper to reach high and turn over the bar. With a high tempo it was Forest who had the next chance as McKechnie delivered a cross that was just headed wide by a rising Kelly Finley. Forest’s Mariah Cameron was busy both in defence and down the left side to force further tackles by the visitor and Andi Bell was forced to ground again as Loughborough’s physicality surfaced.

There were some touches of class in the centre with Finley winning possession to gift a pass to Howard and Ejupi who linked well to play some great football and retain possession. But with no other real chances the half time score line remained at 0:0

Forest’s Mariah Cameron surges forward Forest penetrated with more chances in the second half and Ejupi had an early long range effort that just scorched the woodwork. Loughborough again consolidated their defences though and were able to link with some good passing movement but failed in the final third as Forest’s back four held their lines well.

Player of the match - Mariah Cameron, had worked hard all game and had opened up space with some surging runs passing forward for Rebecca Kemp on the left side to work well and turn her player to cross for Howard who just missed the target with her resulting shot.

Forest’s Rebecca Kemp keeping possession Forest stepped up the pressure and Loughborough continued to absorb with impressive closing down until breaking the deadlock on the 83rd minute. Mariah Cameron’s throw to Andi Bell resulted in Bell flicking an overhead lob which found the Head of Ejupi to loop into the net putting Forest into the lead.

The pace remained high from both sides to the final whistle where the score ultimately remained in favour of the home side and to the relief of the home support – but Loughborough would feel disappointed after a well worked tactical game that belied their position in the table. Forest remain in 4th place with 7 league games left and a heavy fixture programme including midweek games until Mid-May.

Forest Head Coach Steve Stennett said after the game: “I have to give full credit to the players today. I thought they showed real character. Foxes came with a game plan to have two solid banks of 4 to frustrate our players – and for 45 minutes it worked. The second half though saw us demonstrate real work ethic which wasn’t pretty at times put Foxes on the back foot. We got our rewards through graft and determination and it gives us the 3 points to keep us