Notts County's Meadow Lane Stadium will play host to the Lionesses as England face Estonia in their penultimate European Qualifier... 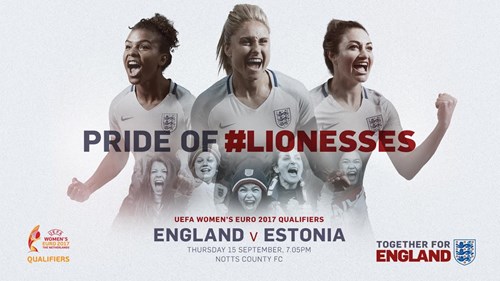 The Lionesses, who are aiming to top Group 7, will play Estonia on Thursday 15 September (7.05pm KO).

England have already qualified for next summer's tournament, which will take place in Netherlands, after beating Serbia 7-0 in Stara Pazova in June.

Tickets are on sale from 9am on Tuesday 19 July, priced £7.50 for adults and £3.50 for children. A family ticket is available, via phone booking only, priced £15 (two adults and two children) while group booking discounts apply.

England beat Estonia 8-0 in the reverse fixture in September 2015, with debut goals from Izzy Christiansen and Danielle Carter, who scored a hat trick.

Notts County captain and England defender Laura Bassett said: “Meadow Lane is a fantastic stadium and I can't wait to go there with England.

“There is a real support for and interest in women's football in Nottingham. Hopefully having an international match here will help us to build on that and that we attract a good crowd too.

“We're determined to top this qualifying group to give ourselves the best possible chance of success at next summer's tournament as well as getting a win in front of our supporters in our last home qualifier.”

Matthew Alexander, chief executive of Notts County Ladies, said: “It’s an honour for Notts County Ladies Football Club to be able to welcome the national side to our stadium. Domestically, we have one of the highest attendances in the league and this is a fantastic opportunity to get the fans into Meadow Lane and demonstrate the support that the city of Nottingham has for women’s football."

Nottingham was named the first ever City of Football in September 2014 by Sport England and received £1.6million to get more people in the city playing football regularly.

The pilot scheme also has particular focus on encouraging more girls and women to play football, along with promoting the area's FA WSL and FA WPL clubs, supporting the women's game as a whole.