Nottingham City of Football are giving people the chance to play Human Table Football on a giant inflatable version of the popular bar room game at this year’s Splendour Festival... 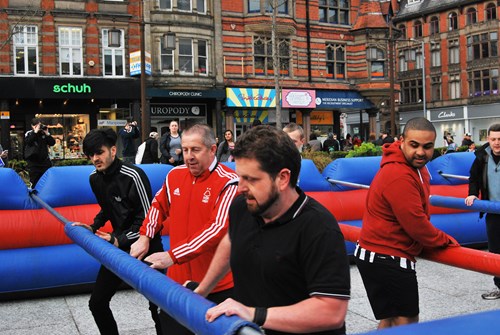 The hilarious and unique game will be part of the Splendour Festival on Saturday July 23 at Wollaton Park with headlining artists including Jess Glyne, The Human League and UB40.

Recognised as the city’s biggest summer day out and shortlisted in the final three for Best Festival in the national Live Music Business awards, DHP Family and Nottingham City Council are keen to replicate the success of last year which saw 20,000 festival goers sprawled across Wollaton Park.

Katie Gibson, Programme and Partner Coordinator at Nottingham City of Football said: “It’s fantastic to be working with Splendour this year and playing a big part in the activities available for those in attendance.

“The Human Football table is so much fun and it’s something that every person can get involved in, no matter what your ability is. The inflatable table can comfortably accommodate groups of up to 24 guests at a time, so I’m sure everyone will get a chance to play.

“The best way to get involved in the game is by having fun and enjoying yourself at the same time, so this is perfect and it’s great fitness too, so there are no excuses.

“We hope lots of festival goers come over to our Human Football Table and get involved or even just watch the action unfold.”

The Human Football Table is being provided thanks to the generosity of the Adrenalin Jungle Activity Centre based in Bilsthorpe. You can find out more by going to www.adrenalinjungle.com

As well as a giant Human Football Table, the Nottingham City of Football project will also have selfie frames on the day for visitors to snap their pictures, prize giveaways throughout and information on how you can get involved in football in and around Nottingham.

For more information or for tickets go to www.splendourfestival.com or the Nottingham City of Football website at www.city-of-football.uk