Neither team could find the breakthrough as Liverpool and Notts County shared the points in a goalless draw at Widnes... 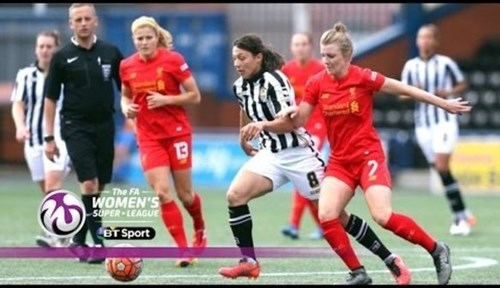 Notts County manager Rick Passmoor insists his side left Liverpool with not just a point but also a valuable confidence boost after holding their opponents to a goalless draw.

Going into Saturday’s clash, Liverpool were on a five-match unbeaten run while Notts County meanwhile could only boast one win on their travels all season.

However they stood firm against the Reds for a hard-earned point to go alongside the FA Women’s Super League 1 home win over the same opponents back in May.

“I’m really happy with the point. We’re playing Liverpool, they were five games unbeaten and are full of confidence and momentum,” said Passmoor.

“I felt we quashed that, particularly in the first half. We got a clean sheet and showed great resilience so I have to be pleased from that point of view.

“If you take four points from two games from Liverpool it means you’re doing something well and will work as a springboard and add to our belief in the games to come.

“We’ve recruited Jo Potter and Jade Moore so we’re looking up now instead of down. We want to add momentum and belief to what we’re already doing.”

It was the visitors who carved out the first chance of the match; Amy Turner’s cross glanced goalwards by Ellen White, but her effort came back off the post.

Liverpool reacted well to that scare, and minutes later Alex Greenwood’s excellent cross was headed over by Caroline Weir from close-range, while Laura Coombs also had a chance before the break.

Ellen White should have opened the scoring for County after the restart, but she blazed her shot over after finding space inside the area. Liverpool substitute Niamh Charles then had a glorious opening on 70 minutes, but Megan Walsh denied her from point-blank range before also tipping wide a Coombs effort.

Liverpool keeper Siobhan Chamberlain said: “It’s frustrating, we were looking to come away with three points and could easily have done so – we were playing a really good team who are difficult to beat, a point is always a positive but it doesn’t feel like that at the moment.

“We dominated the game but struggled to create many clearcut chances, I’d still say we did more than enough to win the game so even though it is a decent point it’s really hard to look at it like that right now.

“There’s still plenty to play for this season, we’ll take this frustration into the next game against Arsenal, where hopefully we’ll put our chances away, there’s enough quality in this team to do so.

“Obviously you always want to do well against your former team and from a personal point of view it’s always good to get a cleansheet, they’re adding up now so obviously we’re doing something right at the back.

“I’d much rather win 2-1 than draw 0-0, that’s for sure, but if we keep doing our job at the back we know we’ll have a good chance against anybody.”

The Lady Pies next home game is Sunday 24th July KO at 16:00 against Manchester City Women