Coveted by Nazis, stolen twice, recovered by a dog, lifted by numerous football greats and much more. This weekend it comes to the city... 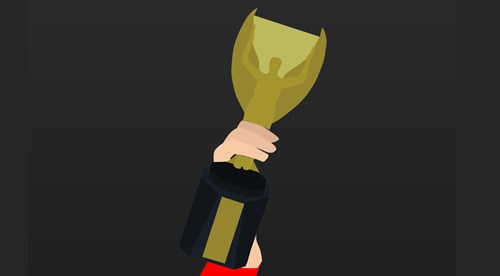 A Brief History of the Jules Rimet trophy

1921
Jules Rimet, a French football administrator, becomes the 3rd President of FIFA. He will go on to serve for 33 years and become a major influence in the formation of the World Cup Tournament in 1930, which is won by Uruguay.

1942
The 1942 World Cup tournament is cancelled due to the war, but to raise spirits the trophy is officially renamed in honour of the FIFA president. It was designed by Abel Lafleur and made of gold-plated sterling silver on a white/yellow marble base. It stands at 35cm high and weighs 3.8 kilograms.

1946
Another tournament is cancelled due to the second world war, but FIFA are thankful that the trophy is still safe. It's been held since 1938 in a Rome bank, by winners Italy. However, canny Italian Football Federation President Ottorino Barassi fears for it's safety as the Nazis are looting museums across Europe. So he takes it home and hides it in a box under his bed. Despite his apartment being searched, he keeps it safe all those years.

1954
Following West Germany’s victory in the Switzerland tournament, the trophy resides in Frankfurt. However, photojournalist Joe Coyle later claims that, having studied certain photographs, the trophy taken to Sweden for the 1958 finals was 5cm taller and had an altered base from the 1954 version. It has never been verified that the trophy was adapted or exchanged while under German control.

1966
The trophy is held on public display at Westminster Central Hall in London for three months before England are due to host the tournament. During a routine check one Sunday lunch it is found to be missing: the glass case smashed and the back doors to the building forced open. Oh dear!

A ransom demand is made to the FA chairman, Joe Mears and a petty thief and used car dealer Edward Betchley is convicted of “being concerned in a larceny after the fact” and “demanding money." However, the trophy was not initially recovered. Fast forward seven days and a dog called Pickles comes to the rescue, discovering the trophy wrapped in newspaper outside the front garden of a house in Upper Norwood, south London. To this day, no one knows how the trophy got there. 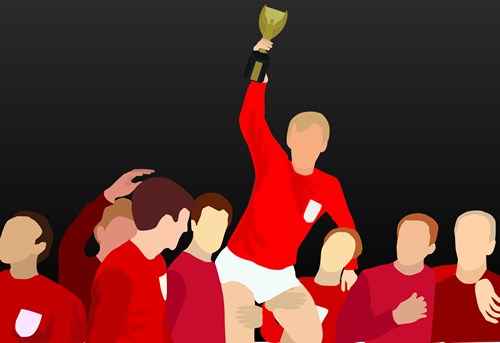 1970
Brazil win the trophy for the third time. This means they are allowed to keep the trophy for good, as had been stipulated by Jules Rimet upon the tournaments foundation in 1930. However, when the trophy was stolen, the English FA disobeyed FIFA and commissioned a replica to be made in time for the tournament. Rumours abound that the trophy England handed back was in fact the replica.

1974
A brand new trophy, simply called the FIFA World Cup Trophy is introduced. Made of 18 karat gold with a malachite base, it stands 36.8cms high and weighs 6.1 kilos. The trophy was made by the Stabilimento Artistico Bertoni company in Italy and depicts two human figures holding up the Earth.

1983
The Jules Rimet trophy, which is now on display at the Brazilian Football Confederation headquarters in Rio de Janeiro in a cabinet with a front of bullet-proof glass, is stolen. Again. Four men are tried and convicted in absentia for the crime, but the trophy has never been recovered.

2016
The trophy comes to Nottingham, accompanied by the incredible teenage cancer fundraiser Jonjo Heuerman. Okay, so it's actually a new replica of the trophy commissioned especially for the Bobby Moore foundation, which earlier this year Jonjo trekked across Europe from Dortmund to Wembley for charity (mainly by bike). But unless you've got some serious contacts in Brazil, this is the closest you'll ever get to lifting the real thing. And you never know, it just might be...

10.30 - 11am
The trophy will make a brief appearance at Nottingham's beloved Broadway Cinema, which will be showing the 1966 World Cup Final the weekend after. Buy tickets for the 1966 screening here.

11.30am - 1.30pm
The trophy heads over to Nottingham's Southbank Bar. Limited photo opportunities will be available in exchange for a donation to the Bobby Moore Fund.

3pm
The trophy will be paraded on the pitch at Meadow Lane, before the Notts County vs Nottingham Forest friendly by Jonjo Heuerman.

4.30pm onwards
The trophy will be on display at the Walton Hotel in Nottingham. If you want a selfie with it this is your biggest chance! Tickets are priced at £22 and this includes a hog roast, live music and appearances from football legends, as well as plenty of photo opportunities. Tickets are available from the Condor Events website.