Jamie Johnson is the brand new series set to take children's television by storm, so we got down to the premiere to find out what it's all about... 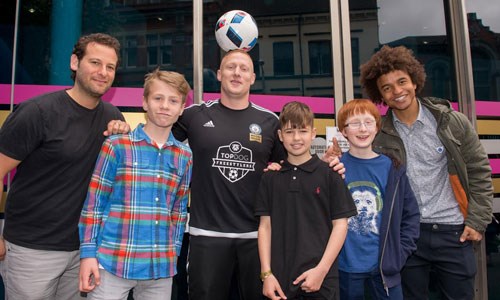 Everybody loves an underdog, especially when it comes to football. With Leicester City’s epic Premier League win earlier this year and Nottingham winning the coveted title of City of Football, there’s never been a better time to be a Midlands underdog.

Cue new CBBC show Jamie Johnson, filmed in Nottingham. To celebrate the release of the show on Monday 13 June, City of Football, along with local families, footie fans and players, got an invite to the exclusive screening event at Broadway Cinema which included a first peek premier of the show, Q&A with the cast and creatives lead by Blue Peter presenter Radzi Chinyanganya and some outdoor football festivities for everyone to get involved with.

At 10am on a drizzly Saturday morning, in true ‘football is come rain or shine’ style, an inflatable Strike A Goal sat outside Broadway Cinema, bustling with cheers and anticipation as children and parents alike lined up to have a go at making it on to the Hardest Strike leaderboard. World Record holding football freestyler, Dan Magness warmed up the crowd, with his top dollar ball skills. The shoe was soon on the other foot, as Dan got the crowd members to have a go at some skills themselves, a switch that quickly made us realise that doing a press-up whilst balancing a ball on your back is not as easy as Dan makes it look.

After a lot of impressive headers and some seriously strong strikes, it seemed that the team had limbered up and we were ready for the main event: the screening of the first episode. Head of BBC East Midlands, Stuart Thomas, introduced the screening, “Projects like this are important to us because we want to inspire kids to enjoy sport”. The BBC and CBBC teams continued to emphasise the pride in their responsibility of creating content that encourages exercise and sport in fun and exciting ways.

The three-part series is based on the book series of the same name by Dan Freedman, and is centred around Jamie (Louis Dunn, 12) – a talented young lad who has to balance the trials and tribulations of joining a new school with his dream of being a professional footballer. But Jamie’s football success isn’t just his own, he’s supported by new friends Jack (Olivia Lava, 11) who gives him a run for his money with her own footie skills, and quick-witted theatrical Boggy (Jonnie Kimmins, 12). The dynamic trio embark on a journey to get Jamie a spot on the school team all while trying to avoid the jibes of the school bully, Dillon (Patrick Ward, 12).

Although the episode follows Jamie’s escalating skills and his dreams of making the team, at its heart is the difficulties we all face growing up. Jamie’s passion for the game helps him come to terms with what life throws at him. “Jamie uses football as an outlet” explains author Dan, “it’s a form of expression, escape and also a great way of making new friends. It’s a very social sport.”

Sam Talbot, one half of the two brothers’ behind Short Form Film Co. who produced and directed the piece, discussed the importance of the narrative of family values in the show, and how football can bring generations together through a shared love and understanding for it. “Although the platform is CBBC, the story was always meant to reach a much wider audience. Our aim was for families to watch the show together… The moral compass of the story often comes from football, and what you learn about yourself in a match or in training is a huge part of growing in to yourself.” 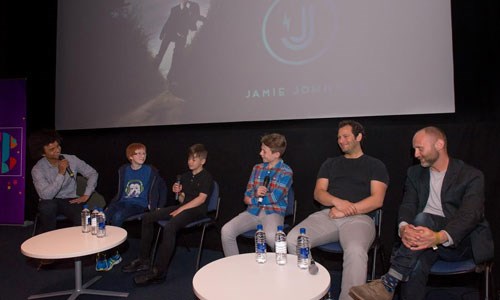 “The hardest part was the emotional scenes”, says Louis, who was cast from an open audition in Manchester on his experience with his first acting job, “One minute I was happy and then five minutes later I had to be really angry on top of doing football skills.” Despite Louis’ first taste of acting he still wants to pursue professional football, “I’ve been working with John Farnworth (Guinness World Record holder) and I’ve been improving on my skills, hoping that scouts will watch the show!”

The actors do all their own football footwork, so casting was difficult. Sam and the production team appeared to be adamant about the focus on ball skills from the start, “Football was first, acting came second. We cast young people with the right personalities, so everything else fell in to place.”

With a cast from around the country, we asked Sam why they filmed in Nottingham. “We originally came here because of the young people at The Television Workshop.” Ian Smith (retired Workshop director) became the acting coach on the project, and members of the Workshop can be spotted as background artists and extras in the show. “Then, Notts County football club were so co-operative with us when using their Meadow Lane ground, and other local locations became perfect for the shoot.”

He assures us, however, that The Television Workshop is the reason that they came and stayed. We asked Nic Harvey, current Workshop director, if he thinks shows like this will encourage kids to get more active. “It’s important that kids have good role models on TV. The emphasis on how sport plays a vital role in the lives of the characters will hopefully encourage kids to incorporate exercise in to their own lives in some form. Jamie is someone who a lot of young boys can identify with and the storyline of Jack addresses the politics of girls and how they’re perceived in football. For people to see those roles from a young age can only aid the steps towards sports gender equality.”

Attending the event was three kitted-out young female representatives from Radcliffe Olympic football club. We asked the high-spirited Katie, Emma and Immie – who have been playing football for two years – what advice they’d give anyone who wants to get involved. “Sometimes people feel intimidated, especially girls. You have to be brave, find your nearest club and just do it.” Interested to hear his view, we asked Louis what advice he has to offer, “Keep practising, and if they don’t believe in you, prove everyone wrong.”

We can’t wait to see more of what’s in store for Jamie when the first series is released on 13th June on CBBC. The team have already started working on the second series and we can expect to see cameos from Gary Lineker, Ruud Gullit and Notts County FC’s Roy Carroll.

Head over to our activities section to find the game for you.