Great news for girls' football as Nottingham Forest Ladies are awarded with a Licence for a Regional Talent Centre.... 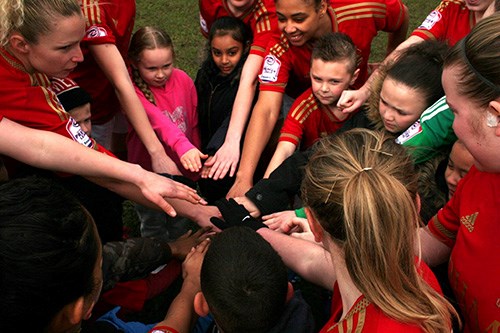 Nottingham Forest Ladies FC is one of only 34 clubs and centres that have been awarded a Licence for a Regional Talent Centre (replacing the previous Centres of Excellence) which will now benefit the best young female footballers within a determined radius of Nottingham. The good news comes after a six-month application process to the FA in which key criteria of delivery excellence have to be achieved. For the 1st year Nottingham Forest Ladies will have aligned funding and resource to deliver a Tier 3 model which will provide enhanced coaching and support designed to improve the development of elite female players through the FA Girls’ England talent pathway.

Nottingham Forest Ladies RTC age groups will cover Under 12s, 14s and 16s. The Under 12s will compete in Charter Standard youth leagues, to enable players to further develop both technically and physically. The older age groups will compete in FA organised fixture programmes against other RTCs. Player trials for the RTCs will begin in June and dates will be advertised w/c 11 May from Nottingham Forest Ladies.

All players at RTCs will be eligible to be selected for England across all tiers and Nottingham Forest will be looking to give the best chance to those players who demonstrate notable talent for development to the highest level.

The following Licences are only awarded subject to Sport England and FA funding and continuing to meet licence criteria:

PJ Andrews, Club Chairperson for Nottingham Forest Ladies elaborates: “We are delighted with the news and the impact this will have on the county of Nottingham in particular. The application was a tough one – but we believe that due to our current status of providing the best standards at grassroots level, calibre workforce, alongside a fruitful collaboration with Nottingham City of Football, the Notts FA, Nottingham City Council and Nottingham Forest in the Community – we have built a model that can support quality development of talented players.

The county of Nottingham has some excellent girls and women’s teams and it will be our duty, ethos and commitment to work with all those clubs wherever we can to identify those players that technically stand out and can now have the chance of recognition on a different stage.”

Amanda Chambers, Managing Director of Nottingham City of Football said: 'What a fantastic opportunity for Nottingham to provide performance opportunities for some of the best young female football talent in Nottingham.

As England's first City of Football we are encouraging and helping more females to get involved in the game. With a Regional Talent Centre talented girls will be able to access support and expertise to help them progress in their own city. We look forward to working with the RTC to develop and nurture this local talent".

PJ Andrews – also adds: “It is equally important to confirm that Forest Ladies will continue to operate our Charter Standard grassroots teams who will continue to benefit from best practices. The RTC and Grassroots model will operate as separate entities but under the umbrella of Nottingham Forest Ladies FC. Grassroots development is our equal passion and Notts FA and the Notts Girls and Ladies League have done a great job to deliver competitive and enjoyable football for the County for many girls and many teams, including NFLFC.

We want to continue to be a part of that and continue to support our existing players. Our club members are meeting early next week to continue discussion and planning as we move positively forward. We would welcome interest from coaches and volunteers in particular to be a part of these exciting times for the club and for girls’ and women’s football. Enquiries to support to Club secretary, Fay Glover are welcomed by email to fay.glover@nottinghamforestladies.co.uk or 07740869756