Notts got their first win of the season, after coming out on top of a five goal thriller, in which Liverpool missed a penalty... 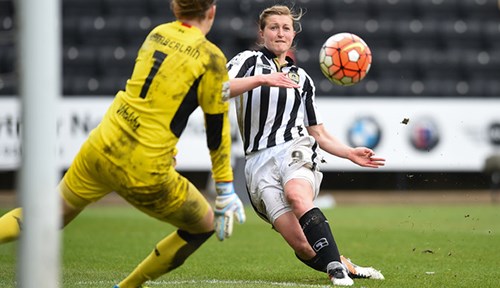 Notts County striker Ellen White admitted getting their first FA Women’s Super League win was a weight off their shoulders, as they held on to beat Liverpool 3-2 at home on Monday.

After White and Jess Clarke had both struck in the first period for the hosts, Caroline Weir’s penalty miss looked to have been very costly for the Reds when White struck again just two minutes later for the Lady Pies.

And the three-goal deficit ultimately proved too much for Scott Rogers’ Liverpool to come back from, despite a late Katie Zelem double – one of which came from the penalty spot.

White was delighted with her double and Notts County go into their clash with Birmingham City next weekend unbeaten in two, but the 26-year-old admitted their lack of clean sheets this season was a cause for concern.

“We’re delighted to get the three points, we’ve been yearning for that first league win,” she said.

“We played some really nice stuff and got some good goals, especially the one Jess scored – it was an absolute screamer!

“But it was disappointing for us not to keep a clean sheet. Those last few minutes must have been exciting for the spectators, but not for us.

“If you take away those two late goals we conceded though, it was a great team performance.

“And it’s given us a big confidence boost after a below par performance in our last game against Reading – we were fortunate to get a draw on that occasion.

“Now we’ll be aiming to build some momentum and we’ll aim to replicate this performance against Birmingham next week.”

Liverpool captain Gemma Bonner meanwhile accepted they had been second best on the day, and pointed out the Reds’ missed penalty as a decisive moment.

But with champions Chelsea next up on Sunday Bonner knows they have no time to feel sorry for themselves.

She said: “We’re very disappointed. We started the game well and created a couple of good chances, but in the end we gave ourselves too much to do.

“Going three goals behind meant we had a mountain to climb, but we can take some positives from the last 15 minutes when we pulled two goals back.

“It might have been different if we’d scored the penalty we had at 2-0. But the penalty was missed, and a comeback became even more difficult when they got their third goal just a couple of minutes later.

“We lost to Chelsea at home last week, but we performed really well and even their manager said we deserved a draw.

“So we’ll go down there next week knowing that we can compete with them, and we’ll hopefully come back with three points.”