Froch to Present Miracle Men with Hall of Fame Honour 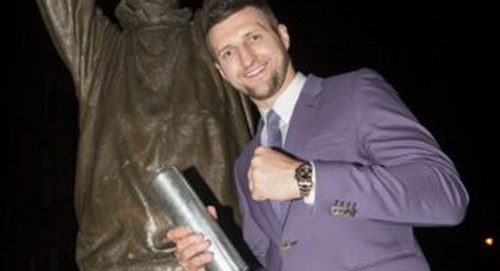 Red’s fan Froch will be guest of honour at the star-studded event that takes place at the Motorpoint Arena in Nottingham on 3 November.

The Colwick-born boxer will feature in a question and answer session about his Forest heroes – a team that he grew up wanting to play for.  He commented: “This is a huge honour for me and I will be proud to stand on stage with the biggest football legends Nottingham Forest has ever produced.  “I was only very young when the Miracle Men won back-to-back European Cups but they have provided the inspiration for a generation and helped put Nottingham on the map in the sporting world. I am immensely proud to be a Nottingham Forest fan and to present them with this award will make a very special night for me.”

Councillor Jon Collins, the Leader of Nottingham City Council, added: “We are delighted that Carl Froch, Freeman of the City, will join us for the Hall of Fame heroes event and present this award to Nottingham Forest. Carl is a huge part of Nottingham’s proud sporting heritage and it will be fantastic for his fans to see him back in the big arena – even if it is without the gloves on.”

Footballing heroes from the past and present will join together at the event on 3 November from 7-9pm at the Motorpoint Arena as the Nottingham Forest European Cup-winning squads and the oldest professional football club in the world, Notts County, take their rightful place amongst the world’s football elite. Over 1,600 football fans and enthusiasts are expected to attend the gala event, which is hosted by Nottingham City Council, and celebrate Nottingham’s status as the City of Football.

Tickets are available priced at £10 for adults and £5 for children and can be bought online via the Motorpoint Arena website.