Hunt is on for talented female footballers

Central College Nottingham is on the lookout for football-mad girls who are starting their final year at school and may already be thinking about their post GCSE options... 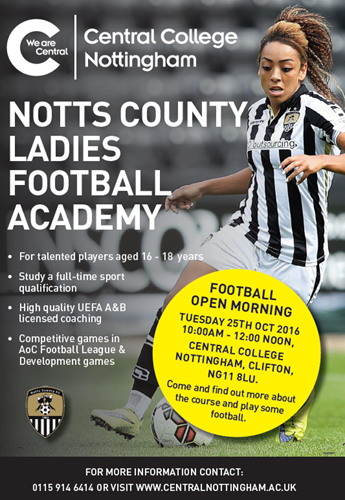 Central, in partnership with Notts County Ladies Football Club (NCLFC), has just launched the second year of its female football academy which aims to unearth the very best young players in the region.

The academy is hosting an open morning on Tuesday 25th October between 10am and 12pm at Central’s Clifton site on Farnborough Road. Players interested in attending the morning will be given a short presentation about the programme and then undertake a coaching session with some of the current players.

Successful applicants who enrol at the academy will get two training sessions per week and play in the highly competitive East Midlands Association of Colleges football league. Players will also receive access to the strength and conditioning facilities to help them improve their game even further.

The education programme will involve students studying a Level 2 or Level 3 sports qualification, as well as undertaking coaching qualifications, while also gaining vocational experience in refereeing, coaching and leadership.

Apart from the pathway towards Notts county LFC, students will be able to progress from this course into work, university or even gain a scholarship to an American university.

Sport Academy Manager, Glen Read said; “The season has started well for the girls, training has been to an exceptionally high standard and they are gelling into a good unit. We are lucky to have Tanya working with the team as she has played at the top of the game and understands the effort and standards required to reach that level. Hopefully as the programme develops we will start to see girls move up and represent Notts County Ladies”