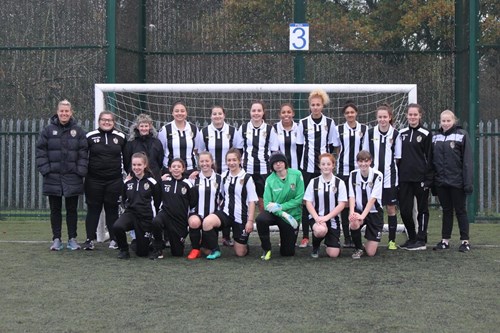 Danielle Sanderson (17), Julia Tamasy (16) and Shanae Thomas (17) enrolled at the Academy in September and are now part of the Notts County development squad. The Academy is a partnership between Central College Nottingham and Notts County Ladies FC. The ultimate aim of the academy is to provide a pathway for talented female footballers to progress from the college into the Notts County Ladies Women’s Super League squad, who compete against super powers such as Chelsea, Manchester City and Liverpool.

Danielle who is from Clifton and is studying level 3 Sport said of her first term at college: “I really did not know what to expect from the academy but it has been great. To have come to the college only having played grass roots football on a Sunday morning I never dreamed that within six weeks I would be playing against clubs like Liverpool and Sunderland.

The training is well structured and everyone in the group is improving their game all of the time. The standard when I play for the Notts development team is high and I am learning so much about the right way to train and prepare to play football. Everyone in the setup is so friendly and willing to help.”

The Academy programme sees students receiving two training sessions per week. It also offers the opportunity to play in the highly competitive East Midlands Association of Colleges football league. Players also receive access to the strength and conditioning facilities to help them improve their game even further. During November the Notts County Ladies Academy won the East Midlands regional female football tournament and have therefore won the right to represent the region in the Association of Colleges national championships which take place in April.

The programme is run by Tanya Oxtoby, Notts County’s Director of Development, who said: “The partnership with Central has started strongly and I am pleased with the way the girls have all bought into the Notts County ethos. We have a range of players with differing experiences and abilities but the group works really well together and everyone has made improvements in the first four months that the academy has been running.

It’s great that three of the girls have progressed to playing in the development team. It has been a steep learning curve for them but they have shown the right attitude and effort to succeed at this level. The ultimate aim for the academy would have to be a player coming through the academy at Central and progressing all the way to the first team.”

The Notts County Ladies Academy is hosting an open evening for the programme on Friday 24 February from 6.00-8.00pm at Central’s Clifton centre. Female footballers aged 16-18 who want to be part of the academy are welcome to come along to the evening, find out more about the course and also undertake a short training session.