Women and girls from across Nottingham laced up their boots and helped the City of Football to 'Reclaim the Pitch'... 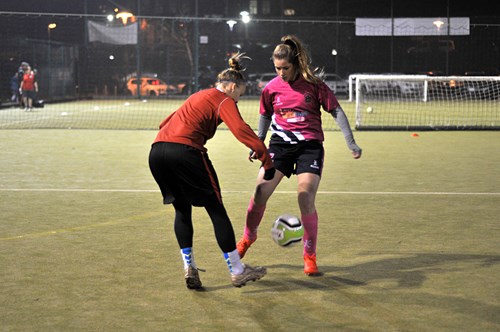 Over 200 women and girls celebrated the City of Footballs Reclaim the Pitch event at the Forest Sports Zone on Tuesday 17th January. 26 teams participated in the three different tournaments, which were; Female Football Fives, Women’s Veterans and U’16’s girls.

The event was put on to mark one year on since our Reclaim the Pitch night was launched and also to celebrate the success and impact the City of Football has had on women and girls football participation rates within Nottingham. The night saw Bayern Neverloosen named champions of the Female Football Fives tournament, and Joolz 3 taking the crown for the women’s veterans competition.

The City of Football also welcomed a special guest appearance from Sport England’s Director of Sport, Phil Smith, who came to check out the Reclaim the Pitch set up. The night also involved a special performance from Joseph Hall and his ‘Footy Fit’ programme, which combines dance and football.

Amanda Chambers, Managing Director at Nottingham City of Football commented “The growth of female football in the city has been a particular highlight, over 40% of people who attended the activity sessions were females, and more women and girls are taking part in football throughout Nottingham than ever before.

“More and more people, from many different backgrounds, are now finding their football locally and we are proud to not only have played our part in that, but also to remain as the only City of Football in this country.”

The City of Football would like to thank all of the women and girls who supported such a fantastic event, and we hope it inspired more of you to lace up the boots more regularly! We would also like to thank Central College for providing volunteers to help ref and score the games.